In this submission we present an unusual presentation of disseminated histoplasmosis as isolated cutaneous findings without systemic signs of illness in a patient with chronic skin abnormalities from Sèzary syndrome. This case demonstrates the importance of formulating a wide differential diagnosis in the setting of new skin lesions in an immunocompromised host with the need to obtain histopathology and culture for definitive diagnosis. The clinical picture is non-specific which necessitates astute clinicopathologic and microbiologic correlation.

A 61-year-old man presented to dermatology clinic for routine follow up of his previously diagnosed Sèzary syndrome (SS) with complaints of new skin lesions over his chest for the past three to four months. He was initially diagnosed with mycosis fungoides ten years prior with progression to SS. He had previously been on a variety of treatments, including an apoptotic inducing drug for T cell lymphoma, romidepsin. His chronic skin changes, including diffuse xerosis, hyperkeratosis of palms and soles, and upper body erythema, were stable. However, new nodules had appeared over his central chest that were different from his prior lesions. They were not pruritic or painful. He otherwise denied fevers, chills, night sweats, weight loss, fatigue, mucosal lesions, cough, or shortness of breath. He is retired from factory work, had no animal exposures, no recent travel, and no recent construction work.

On exam he was afebrile. Skin exam revealed confluent dusky erythema of the trunk, forearms and shoulder along with diffuse lichenification and hyperkeratosis of the bilateral palms. He also had new erythematous fixed nodules on the upper central chest and right inframammary skin (Figure 1).  Laboratory work up was significant only for platelet count 128 K/µL, absolute lymphocyte count 1.02 K/µL, and total bilirubin 1.4 mg/dL. Due to the concern for new cutaneous lesions from his SS a shave biopsy was performed and sent for histopathology. Results from biopsy are shown in Figure 2. No culture was sent on initial biopsy.

What is your diagnosis? 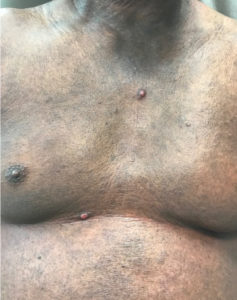 Figure 1. Erythematous fixed nodules on the upper central chest and right inframammary skin on a background of diffuse dusky erythema on the trunk. 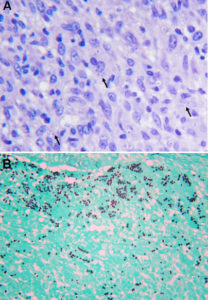 After pathology returned, we highly suspected histoplasmosis but his further non-invasive workup was negative, including negative urine Histoplasma antigen and no Histoplasma antibodies by immunodiffusion. To confirm the diagnosis, he had a repeat biopsy with fungal culture which grew Histoplasma capsulatum confirmed by DNA probe. He was started on itraconazole with subsequent therapeutic levels at 1.2 mcg/mL. At three months follow up he was doing well with resolution of skin nodules.

Histoplasma capsulatum is a dimorphic fungus that causes the granulomatous infection histoplasmosis. Manifestations depend on the inoculum of exposure and immune status of the host. Most immunocompetent patients are asymptomatic or have self-limited pulmonary infection¹. Progressive disseminated histoplasmosis is most often seen in immunocompromised patients. Cutaneous manifestations are uncommon but can present in disseminated histoplasmosis with highly variable presentation including papules, macules, nodules, cellulitis, erythroderma, plaques, pustules, and mucosal ulcers². Treatment depends on the severity of illness and location of infection and can range from supportive care to the use of itraconazole or intravenous amphotericin.

Mycosis fungoides (MF) and Sèzary syndrome (SS) account for about 53% of all cutaneous T cell lymphomas (CTCL)³. Classic MF typically presents with patches and plaques which may evolve into tumors in a small subset of patients. SS is an aggressive leukemic variant that accounts for less than 5% of all CTCL⁴. Infections are a well-known complication of SS likely due to depressed cell mediated immunity and disruption of the skin barrier⁵.

In histoplasmosis, the mycelial form is present on culture with tuberculate macroconidia (8-15 µm) and microconidia (2-4 µm) on hyphae. This is highly suggestive of histoplasmosis but can be seen in other fungi so a DNA probe test for H. capsulatum should be performed. Cultures take several weeks to become positive, so additional methods are useful adjuncts⁶. On histopathology there is a robust granulomatous dermatitis with numerous small budding yeasts. The yeast is present within histiocytes as well as freely in the dermis, measuring 2- to 4-μm. Many organisms display a small halo artifact called a pseudocapsule. The main finding is granulomatous infiltrate with associated yeast, which are highlighted by Gomori- Methenamine Silver (GMS) stain or periodic acid-Schiff with diastase (PASD) stain⁷. This differs markedly from the histologic features of tumor-stage MF which shows a diffuse and dense dermal infiltrate of lymphocytes sometimes with infiltration of lymphocytes into the overlying epidermis) 8,9.

In this patient, the appearance of nodules on the trunk presented a clinical conundrum as it could have indicated development of tumor stage CTCL or a manifestation of immunosuppression in the form of another cutaneous malignancy or an opportunistic infection. This case emphasizes the importance of obtaining tissue for histopathology and culture in setting of new cutaneous lesions with astute clinicopathological correlation.

The Authors declare that they have no conflict of interests

Digital Archive
Our Journal is committed to the permanent availability and preservation of scholarly research and to ensure accessibility by upgrading digital file formats to comply with new technology standards such as CLOCKSS.

Sorry. No data so far.