Since the first report of COVID 19 from Wuhan, Hubei, China in December 2019, there has been a steady increase in the number of cases, with more than 6.5 million infections and about 0.38 million deaths reported globally with the numbers increasing every day. While some countries have been more affected than others, there has been a disproportionately higher number of cases and deaths in the Northern hemispherical countries as compared to those in the Southern hemisphere (Figure 1 and Figure 2). Only lately countries located in the Southern hemisphere have been witnessing an increase in the infected cases with Brazil outnumbering many countries and with more than 550,000 cases and 31000 deaths, becoming the second most affected country. In the same vein, Peru also has about 174,000 cases and the numbers are rising there too1. This may be indicative of a trend of rising cases in the Southern hemisphere where numbers were relatively low in the initial phases of the pandemic. Concurrent with this trend, the coming months are likely to experience a high influenza viral activity in the Southern hemisphere and in tropical/subtropical regions (Figure 3). Many temperate climate countries in the Northern hemisphere have robust influenza surveillance systems, and as such, have well-characterized seasonal influenza seasonality. However, there are large data gaps in many Southern hemispherical and equatorial countries and as such identification of clear trends of influenza circulation is challenging due to paucity of data and inconsistency of the reporting of the data to global monitoring surveillance systems like WHO Flunet. Whereas circulation of seasonal influenza in the Northern hemispherical geographies generally follows a typical seasonality (NH type) with winter peaks in November to March, the circulation in the Southern hemisphere (SH) coincides with winter months in SH (April to August)2,3. Circulation in the tropics and subtropics reveals a more complex seasonal pattern with year-round circulation in some areas and biannual peaks in others. A recent surveillance data of influenza circulation from 9 countries in South and South East Asia (India, Lao PDR, Cambodia, Japan, Northern China, Southern China, Singapore, the Philippines, Thailand, and Malaysia), revealed a latitude related pattern of circulation 4. The circulation of Influenza A predominated between November and March in areas lying north of the 30°N latitude, during monsoon months of June–November in areas between 10° and 30°N latitude, with no specific seasonality being demonstrable in the equatorial areas. The circulation and seasonality of Influenza B matched that of influenza A circulation in areas north of 30°N latitude. However, in areas located south of 30°N, influenza B circulated year-round with less pronounced peaks during post-monsoon period 3,4. Sub-regional variations are known to occur in countries with large landmass like China and India that span multiple latitudes 3-5,whereas countries near the equatorial region like Indonesia, Singapore, Malaysia and Vietnam exhibit year-round influenza activity 6. In another large recent study, the World Health Organization (WHO) FluNet database for 2010–2017 for countries in the WHO Asia-Pacific region was examined7. For the northernmost countries (centroid lying latitude ≥30°N: Iran, Pakistan, Japan, Mongolia, China and South Korea) and countries in the Southern Hemisphere (Australia and New Zealand), the primary peak was in the winter months (i.e., January to March in the NH and August to September in the SH). We have earlier demonstrated that there was a latitude-related variance of influenza circulation in two cities in north India even when they were just 500 miles apart, the one with a temperate climate and located north of 30°N latitude following a NH type of seasonality whereas the other with a more tropical/subtropical climate and located south of the 300 N latitude exhibiting a SH type of seasonality 3. This pattern of circulation defies the general convention of geographical division of the circulation into NH and SH patterns based on geographical (hemispherical) location and demonstrates that influenza circulation in many NH geographies follows a pattern which is more typical of a SH pattern. This 30°N latitude, arbitrarily referred to as the latitude related ‘influenza equator’ serves a better guide to the circulation patterns in countries with large landmass like China and India, even though both are geographically located in the Northern hemisphere.

Currently overall influenza circulation in the temperate zone of the northern hemisphere, Caribbean, Central American countries, tropical South American countries (except Mozambique), South Asia and South East Asian countries, has been low; whereas influenza activity in the temperate zones of the Southern hemisphere, remained at inter-seasonal levels overall. According to the WHO, however, the current influenza surveillance data needs to be interpreted with caution as the ongoing COVID-19 pandemic could have influenced the health seeking behaviours, staffing/routines in sentinel sites, as well as testing capacities. In addition, various social and physical distancing measures implemented for COVID 19 must have also reduced influenza transmission as well8. Coming months thus pose a significant threat of influenza circulation in Southern hemisphere and many temperate geographies falling in the tropical/subtropical Northern hemispherical region as well as those situated near the equator. Against the backdrop of SARS CoV2 circulation, this circulation of influenza viruses might obfuscate the assessment of patients seeking advice for an influenza-like-illness (ILI) or a severe acute respiratory infection (SARI) and it would be difficult to differentiate influenza from COVID 19 posing enormous challenges to physicians, public health personnel and policy planners. The scene is also likely to be complicated by the fact that there may be co-infection of the 2 viruses in the same patient, as has been reported infrequently from China 9, and more recently from Iran 10. While most of the countries have resorted to strict lockdown measures, parallel to the public health considerations, the governments are also concerned about the economies of their countries because most of the low and LMIC countries in the region can ill afford a prolonged shutting down of their economic activities. There is a growing concern that more people in these less-privileged economies would die of hunger than with COVID. As a result of these concerns, most of the countries have started to ease out the restrictions in a balanced and calibrated fashion. This inevitably will lead to increased mixing of people and a potential spurt in cases of ILI and SARI, partly contributed to by COVID 19. A parallel circulation of seasonal influenza viruses would result in these countries to be in for a double whammy, the circulation of two viruses causing a similar clinical picture with varying potential of transmission; one with available effective treatment and vaccine and the other with none that is clearly safe and effective. Under these circumstances, it is imperative to stress on a more universal uptake of influenza vaccination, especially among those at high risk of complications, in the hope of achieving significant protection from influenza so that the effects of the double whammy can be mitigated to some extent. A quadrivalent vaccine may be a superior choice in comparison to a trivalent vaccine, in order to cover for the possible mismatch of the circulating and the vaccine strain of influenza B, should influenza B be co-circulating with influenza A or be the dominant strain of circulation. This is especially important in light of the fact that many countries in these geographies do not have National Immunization Programs that support routine influenza vaccination. Further the influenza vaccine uptake is poor, even in groups at high-risk for complications like health-care workers 11, pregnancy 12, or patients with chronic conditions 12; as a result of multiple barriers to vaccination that include climate and geographical conditions associated differences in circulation of influenza at the sub-regional level, poor awareness about the vaccine, poor education, misperceptions and misconceptions about safety and efficacy of the vaccine and economic considerations 13.

Thus, regardless of the hemispherical location and against the backdrop of an anticipated surge in influenza circulation, aggressive campaigns aimed at increasing influenza vaccination uptake are the need of the hour in areas that follow a SH pattern of influenza circulation, so that the fallout of the double whammy of concurrent circulation of seasonal influenza and SARS CoV2 viruses is mitigated.

The authors declare no conflict of interest regarding the contents of the manuscript. 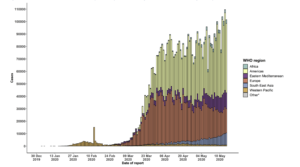 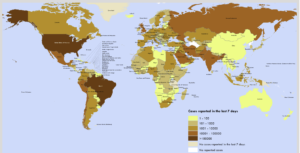 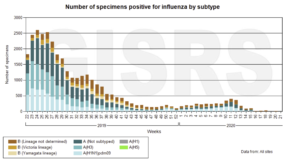 Digital Archive
Our Journal is committed to the permanent availability and preservation of scholarly research and to ensure accessibility by upgrading digital file formats to comply with new technology standards such as CLOCKSS.